It’s an annual rite, an obligation actually.  I depart from my life to unplug and renew for a few days, to retreat.

This year, I chose something a little different.  I decided to live among a cloistered community of Catholic monks living in a remote section of Central Massachusetts.  I knew little about them other than the fact that they welcome guests who seek spiritual rejuvenation in a quiet and remote setting.  I could live among them, but not interact.  I could insert myself into their routines, but remain on the periphery of their separated ways.

I have always been fascinated by monks.  To choose to abandon this world, to live in close quarters and to follow a set regimen, day after day.  Who would select this life?  Who were these men?  What were they like in high school?  Fascinated.

I drove to the monastery and onto the long driveway forward.  My cell signal had long since quit, suggesting that my desire to be unplugged was going to be rewarded with a complete inability to connect even if I wanted it.

A golden retriever greeted me as I walked from my car to the clearly indicated “Visitor Center”, which I noted was quite obviously distinct from the wrought iron surrounded structures before me.  A cloaked man, a monk, walked hurriedly behind the main gate of the enclosure, peering up at me and than back to his task.  The Center was empty of people but filled with symbols of its purpose.  Religious statues, books, holy representations filled a clean and simple room.  I noticed a push button which accompanied a handwritten note instructing me to press it to page the “guestmaster”.  I obliged.

Within a few minutes, Fr. Robert entered the room.  He was cheery, talkative and not what I expected.  We spoke for five or ten minutes and he gave me an overview of the facilities and schedule.  He showed me the chapel and the refectory (cafeteria).  He calmly and firmly noted that silence is maintained and that it’s customary for guests to not engage with the monks.  We are to live together but maintain our distance.

Soon thereafter, I was on retreat. 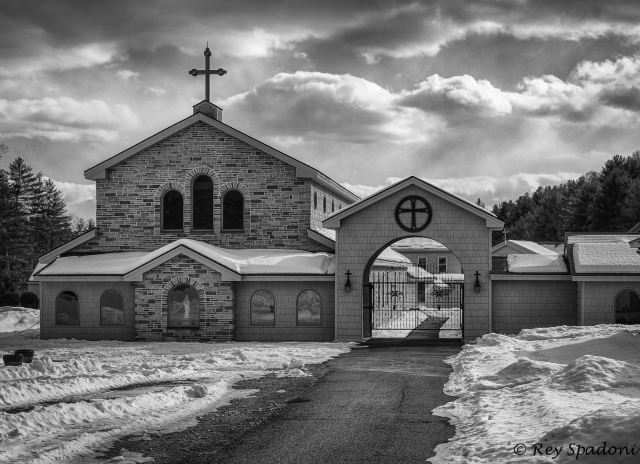 Who are these men?… I kept asking myself during the stay.  There were approximately 16 of them living at the monastery, most white haired and white bearded, but there were a few who appeared to be in their 40s, a few in their 50s.  One could have been late 30s.  And that one, the young one.  He must have been a football player in high school or college based on his build.  Though we didn’t speak, other then when he reprimanded me during a Mass for handling the peace greeting the way I’ve done it most of my life (but which is explicitly not the monk way), I found him to be very likable.  He had a cheery disposition, I observed.  He smiled often and gave knowing glances at his fellow monks which were always met by their smiling and knowing glances back.  It was as though there was a running joke between all of them… one they enjoyed.  The football player monk was not the high school recluse I imagined.  He was probably the opposite.  Yet he chose this life.  A life of separation.

A few times, when I entered the refectory, I saw the monks talking to each other, but upon seeing me, they quieted and went about their business.  Was I maintaining silence for their sake?  Or were they maintaining it for mine?

Separation.  A few days to distance myself from myself.  I am addicted to connection, to immediacy.  This most often takes the form of the iPhone or iPad I always have by my side.  Have a question, google it.  Have a thought, note it.  Want to order the Cokin 58mm neutral density filter, go to the retail app and buy it.  Thinking of one of my kids, text them.  Too much solitude, crush it with a podcast or playlist.  Immediacy.

But the monastery is everything but that.  There is a rhythm to the day, to everything.  The prayer services and Masses are largely sung/chanted.  The choreography of movement is impressive and intricate.  I wondered how they could remember the many parts, with cloaked men, heads tilted mildly downward, traversing the sanctuary just like medieval chess pieces.  The visual feedback bombarded me as shards of light cut through narrow windows and candles cast glows and danced with shadows throughout the space.  Had it not been so obviously improper to photograph all of it, I would have.

Fr. Robert spoke to me in the afternoon of the second day.  At length.  We discussed the monks’ sense of our world and also the challenges of their own “relatively safe environment”… and how temptations and distractions persist even there.  At the end of our conversation, I told Fr. Robert he was “a good guy” which was an emotional and unrefined response to the tremendous gift of time and insight he gave to me.  He laughed, uncomfortably, at my compliment, though I think he got what I was trying to say.

Over the course of the few days, I minded the lack of wifi and cellular signal less.  Sure, I missed Starbucks and reading the various blogs I frequent, but the rhythm of the monastery started to sink in.  And on my last day, as I drove back along the long and bent driveway, I felt sadness.

The monks there tell a story.  A neighbor frequently drops by the monastery, asking if he can pick some things up for them at the store or to run some errands for them.  On one day, as he was in a store on their behalf, the shopkeep stated: “Oh, you’re the one who does errands for the monks.  You must be their link to reality.”  The man simply said: “No, they’re my link to reality.”

And now I understand.

This entry was posted in Essay, Images, Uncategorized and tagged cloister, monastery, monks. Bookmark the permalink.

12 Responses to A Cloistered Life