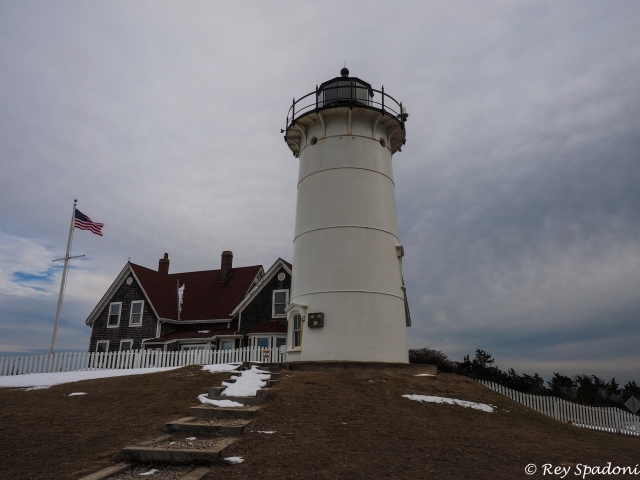 It’s a lesson I learn.  Over and over again.

So, you’re headed out with your camera.  Which would you rather photograph – an iconic Cape Cod lighthouse or an ordinary, run of the mill stop sign?

Well, that is not exactly the right question to be asking.

These images are a case in point.  The lighthouse, Nobska Point Lighhouse in Falmouth, Massachusetts, is often photographed, from a variety of angles and in a number of lighting conditions.  Yesterday, I wandered by early in the morning, ready to grab my own version. Unfortunately, access was restricted to the angle you see above and the sky was a mostly overcast, flat grey.  (Note: I propped up the cloud detail in Lightroom a shade or two to make up for what mother nature failed to provide.)  All in all, despite the fact that I was equipped with the mighty Olympus OM-D E-M1 digital camera, mounted with the well regarded Olympus 12-40/2.8 lens, the image stinks.  There’s just not much there.

Contrast that to the photo on top.  It was a quick drive-by scenario, maybe a mile from my house.  I had the practical Fujifilm X10 compact point & shoot camera by my side… it just happened to be there.  And while the subject itself is completely unremarkable, the shafts of light pushing through the trees just begged to be captured.

Lesson learned.  It’s about the light.  And you don’t have to go to Tanzania or Iceland or New Zealand to find it.  It’s right next door.  Now go find it.

This entry was posted in Images and tagged lighthouse, olympus om-d e-m1, searching for light, stop sign. Bookmark the permalink.