Photojournalists Fired! What it tells us…

Last week, the Chicago Sun-Times abruptly fired all 28 of their photojournalists. Included amongst these professionals was Pulitzer Prize-winning Sun-Times photographer John H. White. The rationale behind this decision is economic: like most newspapers, circulation at the Sun-Times is off considerably – which means advertising revenue is too – as readers shift to digital media, and merchants follow.

But fear not, the Sun-Times is not going all-text. No, they informed their reporters that they are now responsible for photographing the events that they cover… with their iPhones. Yes, these journalists, now photojournalists, are being given a crash course by the Sun-Times on how to take photos with an iPhone, and how to send them to the home office for publication with their stories.

And this is all happening because the iPhone and other camera-equipped smartphones are everywhere! The top three most popular cameras in the Flickr community? The iPhone 4, 4S and 5. They are ahead of all the “real cameras”: the Canons, Nikons, Sony’s and so on, and by a wide margin.

Here are five things this proliferation of camera phones tells us:

#1 The bar is being lowered

For the most part, the quality of the images captured by the iPhone just aren’t as good as 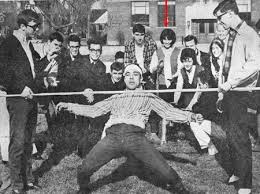 those from the typical high-end SLR or DSLR carried by a professional or serious hobbyist, or even the increasingly more capable advanced point and shoot and bridge cameras. Now, you probably know that I’m a big fan of the iPhone as camera, having made thousands of images with mine. And my mantra has always been that the camera you have with you is the best one. But without the ability to control shutter speed or aperture, with a miniscule lens and sensor, and poor low-light performance, the iPhone has it’s limitations. The results will be limited as well.

And putting a scalpel in my hand it doesn’t make me a surgeon. The trained eye of a seasoned photographer, who sees lights and shadows, who appreciates the subtleties of composition, and who is dedicated to capturing the image, (and in the case of the reporters, not also capturing the story), is going to bring in photos that convey the emotion, the drama, reality of the moment. I have to imagine that those reporters are nervous and not very happy.

#2 If you’re a bad guy, it’s a lot harder to get away with anything

The abundance of camera phones means that whether you’re simply scratching your, ahem, or carrying out a terrorist act, odds are great that not just one but many people will catch you in the act. Just ask the Boston Marathon bombers.

If you always have your smartphone with you, (and you know how to use it) you’re much more likely to be there when it matters most. That eagle swooping in on it’s prey, the dramatic skies and vicious tornado as it bears down, the joyous faces of a family reuniting with a loved one, and so on. Be there and be ready.

Of course, not only will you have your iPhone, but so will the other 10 (100?) people standing around you.

Hmmm, what to do? Be better than everyone else. Know how to compose and use the best apps. Your most important camera gear is what’s under your hat.

#5 If you are a photojournalist or if that is your intended occupation, consider a career change

Those are my fives ideas as to what today’s plethora of camera phones tells us, but this is by no means conclusive.

What does it mean to you? Please let us know your thoughts.

25 Responses to Photojournalists Fired! What it tells us…