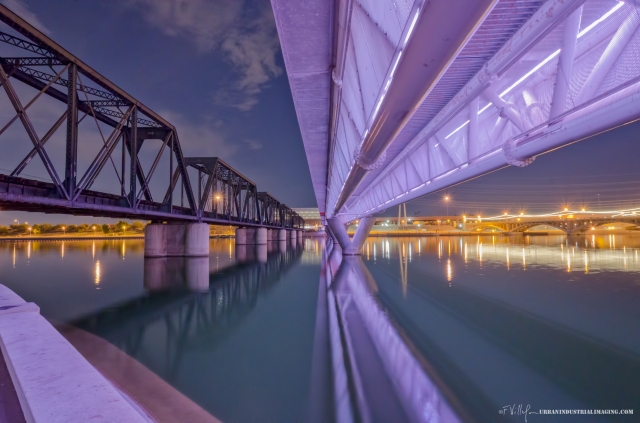 On our trip to AZ, my fiancé and I had dinner at a restaurant in Tempe one evening. Wanting to find something notable to photograph, we queried our waiter as to where we could go to see something “notable”. He directed us to Tempe Town Lake to the lighted railroad bridge. 2012 was Tempe’s centennial year, and they happened to be celebrating by lighting the bridge every evening at the prestigious Town Lake (a man-made lake, as all bodies of water in Phoenix are usually dry). Notice that the original Train Trestle was build in 1912, and the remnant of the original is still standing next to the modern bridge. This shot got me hooked on nighttime photography.

It’s our pleasure to introduce 2 Guys Photo followers to Frank Villafañe.  Frank became known to us through his comments to some of the posts here and particularly because of some of the night photos he’s taken and shared.  As we became more acquainted with Frank and his work, we knew we wanted the opportunity to spread the word about this talented artist.  As you’ll learn, Frank’s artistry extends beyond photography.

We included a number of Frank’s images in this post along with his “backstory” narrative for each.  Read on to find out more about this Perth Amboy, New Brunswick, New Jersey area photographer. 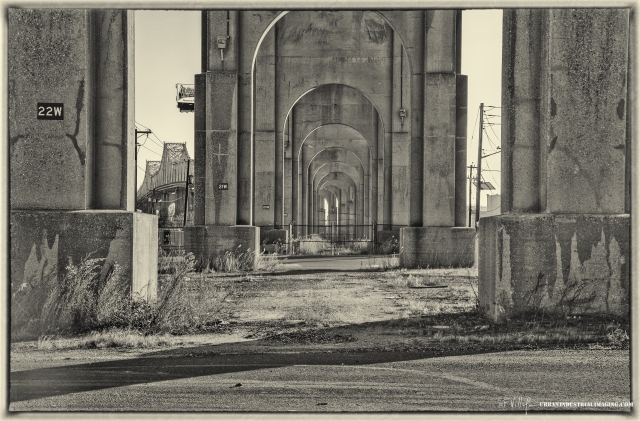 This is one of the earliest bridge shots from my “Port Authority” series. It was taken from beneath the OuterBridge crossing which connects Perth Amboy, NJ to Staten Island, NY. The composition features the arches in a geometrically diminishing pattern, with the bridge itself “peeking” from between two of the columns. I converted to black and white to give it a “gritty” industrial look. I was fortunate that no security stopped me, given the Post 9/11 threat of terrorism. A suggestion to those wishing to capture these types of scenes – bring samples of your work with you in the event you are stopped and questioned. Pictures DO speak a thousand words.

Software engineer by day, performing latin jazz musician by night (and weekends), Frank notes: “I am no stranger to urban settings, so I naturally fell into industrial/architectural photography.  I love cities and spend a fair amount of time there as my daughter lives in Jersey City and I visit my grandchildren there as often as I can.”

A quick note about Frank’s musical passion.  He’s no mere dabbler, having had the good fortune of studying Jazz Harmony and piano with the great Kenny Barron back in the 1970s.  Click on this jazz legend’s name to gain a small sampling.

An ongoing project of mine is to shoot the prominent bridges of the North East, particularly, New Jersey. I found the perfect spot to shoot this historical bridge on Duncan Ave in Jersey City. The bridge is over 3 miles long, so I could only capture a portion from this vantage point. The factory prominently displayed is the Kearny Power Plant. The area is an industrial photographer’s dream.

Preferring full frame gear, Frank shoots with a Nikon D600 (and the universally appreciated Nikon 24-85) as well as the versatile Nikon 28-300. 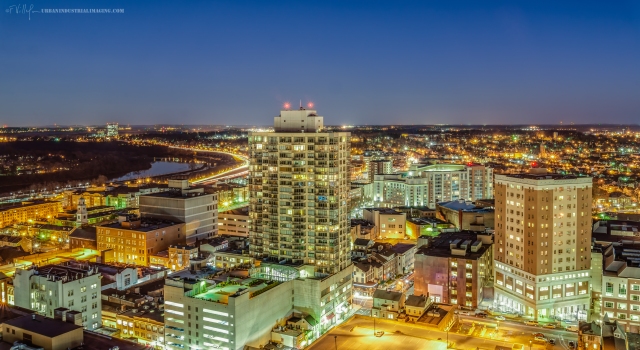 This shot has an interesting history. After Sandy vented her rage on the East Coast, I had some downtime while CubaCan was being renovated (the Cuban restaurant on the shore where my quartet regularly performs). I always wanted aerial nighttime photos of New Brunswick, so I contacted the property management company of The Vue, the tallest building in New Brunswick. They graciously allowed me to shoot atop the roof one evening. After seeing this shot, the CEO purchased several prints of mine, and contracted me to do some work for them. While printing this image for the CEO, the printer noted that this would be an excellent entry into the call for artists for an upcoming exhibition at a local Gallery in New Brunswick. I submitted the entry, and it was accepted, along with other images of mine, and I will be a featured photographer at the “New Brunswick Through Photographer’s Eyes” exhibit this coming Thursday at the Alfa Art Gallery (www.alfaart.org). Serendipitous? Yes! I thank the Lord for the opportunity as this has validated my work, and more opportunities have grown out of this one seminal image of the city. Who knew? Just goes to show…keep shooting, people WILL eventually take notice.

Frank cut his photographic teeth on a Kodak Instamatic while still in high school.  We always remember our first digital, and Frank recalls his – an Olympus C4000.  That was over a decade ago, but it wasn’t until just thirteen months ago that Frank started shooting seriously.  He ventured into the DSLR realm with Nikon D5100 and then eventually upgraded to the full frame camera he now shoots. 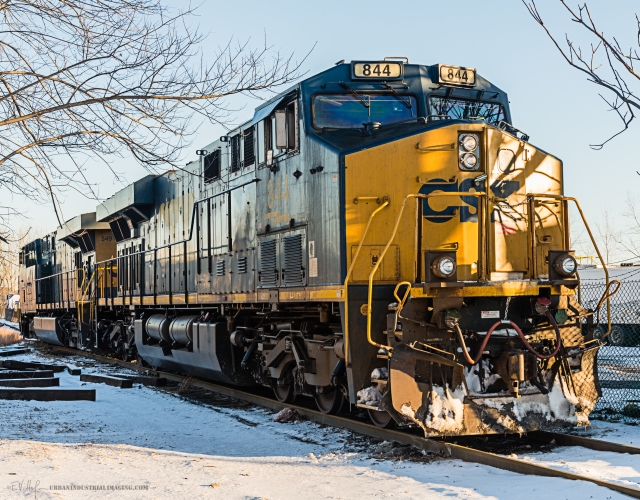 While shooting the Pulaski Skyway last month, I drove around scouting the area for anything notable and “found” this engine idling just outside the Kearny yard. Since the area is totally accessible, I parked and took a number of shots, handheld. I’ve always wanted a “winter-y” shot of a train in the snow…this is it.

In terms of his stylistic evolution, Frank tells us: “I once did a great deal of HDR post-processing.  I no longer use HDR that much.  I began professionally shooting real estate interiors in the summer of 2012, then moved to industrial/architectural photography, primarily twi-night city scenes.  I landed my first big client in December last year, sold and licensed my first prints.  I began serious study or tutoring with a professional, Nancy Ori, industrial photographer back in October, and with her tutelage was able to land the client and the show.  Where I once took many shots without adequate composition, I now take fewer shots and compose before shooting.  I’ve read a great deal of books on my chosen specialty, industrial/architectural, and they appear to have paid off.  Serious study has also been very helpful.  Eventually, I would like to attend school and learn a great deal more… in due time.”

Simply put, the Bayonne Bridge at twilight. The lights are on, in red, white and blue. This was shot with a long zoom (28-300mm) from the corner of 1st St and Ave A. I grew up in Bayonne, and some of my earliest memories are centered there. This is my favorite bridge, and I’ve shot it a number of times, both on and beneath it. If this bridge looks familiar, it’s probably because the Bayonne Bridge was prominently featured in Steven Spielberg’s remake of “War Of The Worlds” starring Tom Cruise.

When asked what he prefers to shoot, Frank notes: “I love to shoot industrial scenes or cityscapes.  Something about the urban East Coast has always attracted me – I’m originally from Bayonne.  My logo is a composite of the NYC skyline and the Bayonne Bridge [editor’s note: Frank’s website link is provided below].  Bridges and urban decay is also very appealing to me… I can’t say exactly why… maybe because of the historical significance.  I shoot natural landscapes as well, when warranted, usually when traveling such as in Sedona, Arizona.  Finally, I shoot trains… rail yards, trestles, cars and engines.  Large machinery captivates my imagination.  There’s just something nostalgic about trains…”

One day I rerouted to work due to heavy traffic and I “discovered” this fantastic site. I’ve been back twice since and photographed the plant on the river. This was once the Michelin Tire Factory, originally built in 1907. Michelin abandoned the factory during the Depression in 1930, and it has stood empty since. Although the site itself is closed to the public (it will eventually be razed), one can still get a great view across the river. The water tower and smokestack are quite impressive and are what drew me to the site in the first place.

We asked Frank which photographers most inspire him and he had this to say: “David Nightingale, Rick Sammon, Ansel Adams, Stephen Wilkes.  There are others, and I currently study with Nancy Ori.  David and Rick inspire me with their fantastic, surreal HDR images.  Stephen Wilkes’ cityscapes are absolutely unique.  Nancy Ori is an artist as well as an architectural/industrial photographer.  For painting industrial scenes, I am fascinated by Valeri Larko’s work.  I could mention many others such as Paco Marquez, Tyler Stableford, Charlie Borland… the list goes on.  I always appreciate a great image, regardless of who shot it.”

When asked Frank what he loves to shoot, he tells us: “An outstanding city view, a gut-wrenching industrial wasteland, brooding bridges, fantastic oil refineries, although they are getting harder and harder to shoot… I almost got arrested the other day shooting the Linden Refinery – and they made me delete all the images I took…oh well… huge train engines, surreal urban decay.  I’m a city boy, and I love the vestiges of gritty city life.” 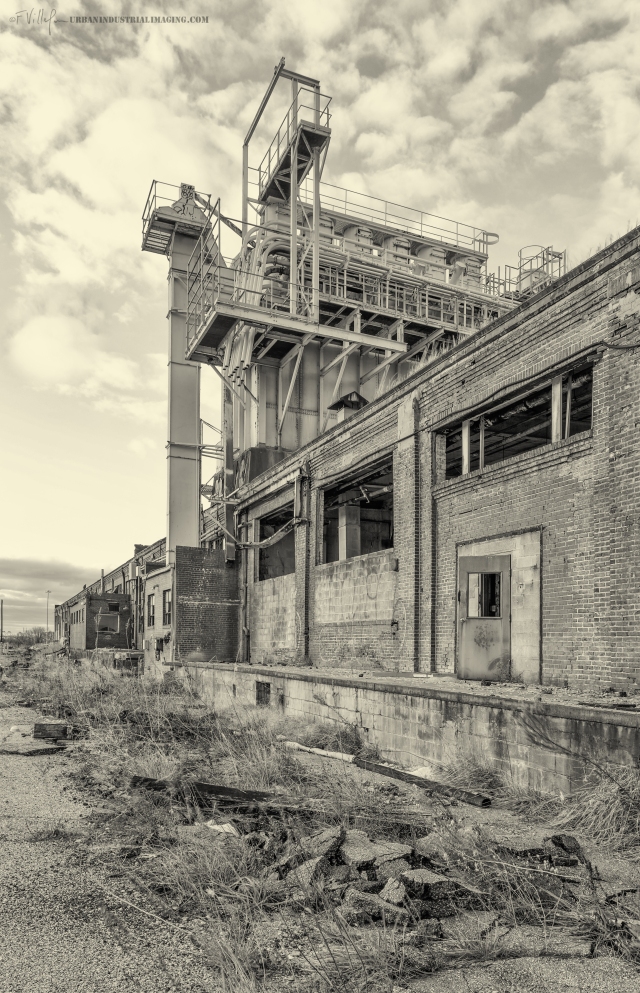 Directly across the street from the huge Johns Hopkins facility on Eastern Ave in Baltimore is this abandoned site. Once the home of PEMCO, a Porcelain, Enamel & Materials coating manufacturer, it is now a toxic waste dumpsite that is to be cleansed and razed. It stands in stark contrast to the modern Johns Hopkins facility across the street. While driving by on my way to the Inner Harbor, I was drawn to the site and took some photographs.

Frank’s future photographic plans are to, “shoot industrial/architectural photography whenever and wherever the need arises.  If I have clients, great; if not, I’ll scope out areas and stay busy.  There are many cities in the North East, so I won’t run out of material anytime soon.  I would like to expand my photography to include portraiture… with time, I hope to retire from IT and make a go at this full-time.”

Finally, we asked Frank whether he had any advice for a photographer who is just staring out or someone who is wanting to improve their skills.  Frank suggests: “Read voraciously, learn your instrument, take a few workshops, join an organization that specializes in the type of photography that excites you, find a mentor, then just get out there and shoot!  This is a wonderful world…go out and capture it!”

To get in touch with Frank or to see more of his work, see his website here.