One of the cool things about the Sony NEX line of mirrorless cameras, which we’ve been writing about a lot on this blog, is that, with the proper adapter, you can mount almost any lens onto an NEX body, adding versatility, and for those coming from another system, it can save you a few dollars too.

Knowing this, when I decided to put all of my Nikon DSLR gear up for sale, (having made the switch to the Sony NEX 6), I kept one item: my Nikon 35mm f/1.8 prime lens. This is one sharp, fast little lens, which on my Nikon D90 as well as the NEX 6, provides a 1.5 times crop factor. So with the APS-C sensor that both of these cameras have, that 35mm becomes a very useful 52mm focal length.

There are many lens adapters to choose from and the prices range from $20 to $500+, and while this post is not intended to be a review of available adapters, I can tell you that after some research, I was able to choose a model for under $40 that has served me well. Back to that in a minute – in my case I needed an adapter that would allow me to adjust the aperture of this Nikon lens, since this is a “G” lens, meaning, it does not have an aperture ring. The aperture is normally adjusted through the camera controls. But many of these adapters, even the most expensive models, do not connect electronically to the body. That is, there is no interface of data to and from the lens – so you cannot control the aperture from the camera – you need a mechanical aperture ring on the adapter.

So the model I chose, which has an aperture adjustment ring to accommodate G lenses, was the Fotodiox NIK-NEX Nikon Nikkor Lens to Sony Alpha Nex E-mount Camera Lens Mount Adapter from Amazon. OK that’s a mouthful for such a small device. Although some reviewers complained of fit issues, mine was machined perfectly and fit on both the lens and the NEX 6 body smoothly and snugly.

There’s little information provided with the adapter, but it’s pretty intuitive as to how it should attach to both the lens and body. It’s the basic line-up and twist that we’re all familiar with.

The fact that there’s no electronic interface through the adapter, means that you’re shooting manually, both in terms of exposure and focus, just like in the “good old days”… although not exactly, because the NEX 6 makes it pretty easy.

The first thing you need to do when using a lens with any adapter on the NEX 6, is go into the Setup menu – Shooting Settings – Release w/o lens – Enable. Again, since there’s no electronic interface between lens and body, the camera thinks there’s no lens mounted, and won’t operate. But anticipating, and actually promoting the use of adapters, Sony added this feature to basically say to the camera, “Trust me, there’s a lens attached”.

Next step, focus. There’s no half-press, auto-focus here, you need to focus manually. But that’s pretty simple with the “focus peaking” feature in the NEX 6. With focus peaking on, as you manually focus, the in-focus edges in the scene “peak” in the color you’ve chosen. 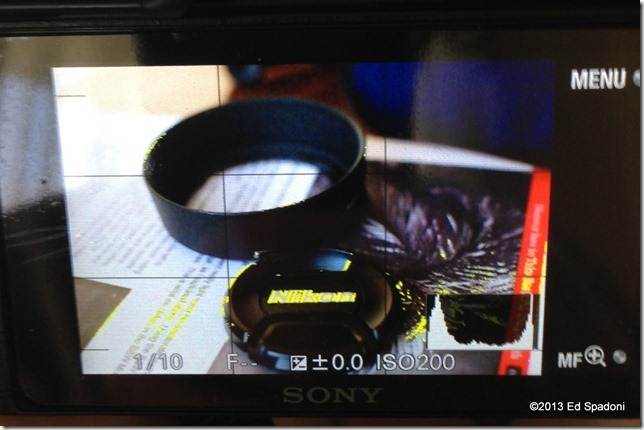 This was just a quick shot with my iPhone 5 of the LCD on the rear of the NEX 6, but you can see the focus peaking at work. I was (manually) focusing on the Nikon name on the lens cap. When the peaking color is at it’s max as you focus, that’s your sharpest point of focus.

When shooting at a large aperture (small f/ number) you minimize your depth of field. As you adjust your aperture manually, you can see the peaking move across the scene – yes, you can actually see the in-focus area change as you manually adjust the lens.

To turn on focus peaking, go into the Setup menu – Shooting Settings – Peaking Level. Change it from Off to your choice of Low, Mid or High. I use High for maximum visibility of the peaking. Right below that in the menu, you can choose your focus peaking color, white, red or yellow. I find that yellow is the most distinctive color and use that most of the time.

Lastly, set your exposure. You can operate the camera in Aperture Priority or Manual modes with the adapter. In either case, you’re setting the aperture with the adapter’s ring, but with no indication of exactly what aperture your choosing. (At the risk of being redundant, remember, there’s no feedback between lens and camera body when using the adapter.) So how do you choose the right aperture? With the help of the NEX 6’ live histogram. In the viewfinder, (either EVF or LCD) a lively histogram will respond to your turns of the aperture ring. I generally follow the rule of thumb of “exposing to the right”, so I adjust the aperture until I see just that, without clipping the highlights. But also, the NEX gives you live feedback on the exposure of the scene before you press the shutter button, so you can also lighten or darken as you see fit. If you’re in manual mode, then you would also adjust the shutter speed on the camera in setting your exposure.

There’s no stated aperture, either in the viewfinder or in your EXIF data. Take a look at the focus peaking shot above, and you’ll see “F—“ where the aperture would normally read. So you need to be thinking about the affect of a smaller aperture (less light, greater depth of field) or larger aperture (more light, less DOF) as you set your exposure. 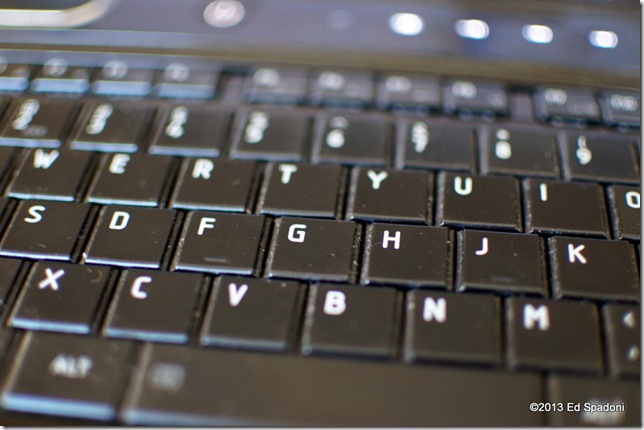 Focusing on the middle row of keys, specifically the “G” key (pardon the dust!)

A quick note – the adapter comes with a tripod mount, and should be used if you mount your camera on a tripod when using the adapter. That’s because the adapter isn’t meant to support a lot of weight. Similarly, if shooting handheld when using a long or heavy lens, be sure to support the weight of the lens with your left hand, to relieve stress on the adapter.

With some care in setting your exposure and focus, the results can be quite pleasing.

Stay tuned tomorrow for more results with the Fotodiox adapter and Nikon 35mm prime on the NEX 6. And thanks for using our links to BH Photo, as any purchases made via one of our links helps 2 Guys Photo in an itty-bitty, but much appreciated way!