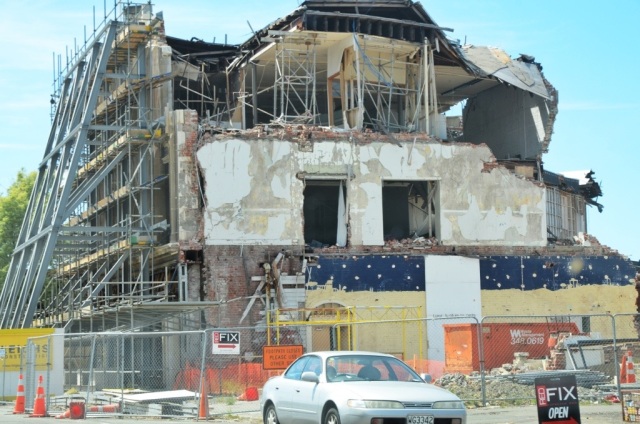 According to Jonathan Kruse, the voice on our self-drive GPS unit, Christchurch is the prettiest city in New Zealand. My observations are that there’s ample evidence that that once may very well have been true. Surely Mr. Kruse recorded his remarks prior to the devastating earthquakes that claimed the lives of 185 citizens and essentially wrecked the entire downtown area.

In late 2010, a major quake shook the city, leaving structural devastation but no deaths. It took place during off hours when the city was virtually empty. And though there were substantive aftershocks, no one expected the major tremor that rocked the city in early 2011, claiming the lives and shutting it down for good.

The aftermath is a confusing maze of semi-passable and closed streets, makeshift “malls” constructed out of old freight containers (see below), and a city that is being simultaneously deconstructed and rebuilt at the same time. Because of its location and international airport, there’s little choice but to make do and go on. Still though, there are plans underway to move the entire city center to a different location, one that scientists say is off the primary fault line. It’s a precarious situation, one you can feel as a tourist trying to make sense of what was once the pride of the country, what was once the prettiest city in New Zealand.

This entry was posted in Uncategorized and tagged new zealand. Bookmark the permalink.

1 Response to NZ Journal: “The Prettiest City in New Zealand”