If you’ve been following my earlier posts about our trip to Mt. Desert Island Maine, then you know that we ran into some very heavy fog along the way.  I was concerned that the lighthouse, (assuming we could find it in “the soup”), would be so fogged in that I’d miss that iconic picture that I hoped for.

Well, upon arrival, we managed to snag one of the few parking spaces and, like every other visitor, headed down the main path to the right of the lighthouse.  And there it was: small, almost petite for a lighthouse, white and grey against a white and grey background.  Not much to look at, really.

But having done some homework beforehand, I knew that there was an unmarked path to the left of the lighthouse that ordinarily, according to the literature, provided a better perspective.  Worth a shot, I thought.

We headed for that path, descended some rustic wooden stairs and found ourselves on the rocky coastline of Maine, rugged and ancient, and like everything else we saw that day, shrouded in grey and white.

Not being exactly certain how to shoot the Bass Harbor Light in these conditions, I bracketed +/- 1 stop, and experimented with tone mapping in Corel PSP X4 to try to balance the range of (abundant) shadows and (limited) highlights in the scene.

Ok, so it’s not the vibrant scene I’d appreciated in tour books and on the web, but at least I was there and able to get something.

We spent another 45 minutes or so climbing over the rocks, taking pictures, grateful for the opportunity to be in such an alluring place, despite the weather.  And then it happened.

First it was just a glimpse, and then a swath, but there was actually BLUE in the sky!  the sea began to change from grey to blue too, as the clouds burned off and the beauty of this southern tip of the island revealed itself. 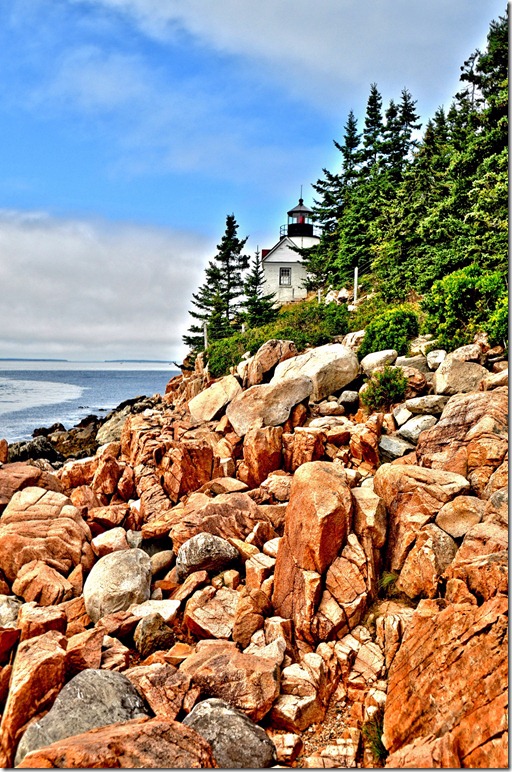 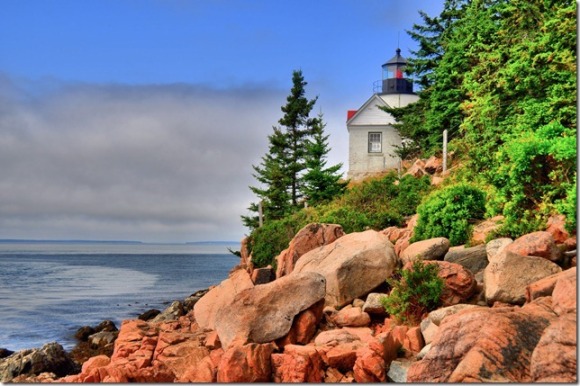 With a feeling of satisfaction and gratitude, we started to climb back up towards the stairs and the car.  But I took one last photo.  This one was with my iPhone 4, using the app HDR Pro, which takes two images, aligns and merges them, and then allows for some fine-tuning.  I wanted something that I could easily send home to family members, so they could share in our experience.  I didn’t expect much, but in the end, I thought this iPhone pic, unedited, was actually pretty good.

So, the moral of the story is…  never say never, be patient, and your wishes just might come true.

Thanks for visiting 2 Guys Photo.