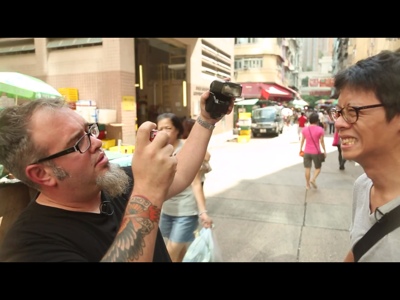 Rey has long been a fan of Kai Wong and his website DigitalRev.com. Kai is best known for his informative and entertaining video reviews of the latest gear, but he also has a series known as the Cheap Camera Challenge. Rey sent me this one just this morning, and for reasons to follow, I had to get this out to you; I think it’s the perfect companion to your weekend morning coffee.

The Cheap Camera Challenge is simple: invite well known, pro photographers to shoot using only a cheap, (as in the kind you would buy at the local convenience store) camera, and see what they can do.

Today’s challenge involves Kai and Zack Arias, who, because of his talent with and affinity for using a single flash, is given a Nikon flash to use off camera with an inexpensive Kodak P&S.

The 16 minute video, (click on the photo above to watch), takes us along with Zack and Kai through the streets of China, where they attempt to make this odd pairing of equipment work, and to see if pro-quality results can be had.

Zack demonstrates several things for us here, including how to approach people on the street, (remember he’s in China and doesn’t speak the language), that off-camera flash can be a lot more simple than we (I) think, that he’s got quite a sense of humor, and the results? Well, watch the video… he shares the photos he’s taken with us at the end.

I won’t give anything away, but as Rey said to me just a few minutes ago, he’s already sold all his gear and bought a red Kodak point and shoot. I’m heading to CVS in a few minutes.

Enjoy, and we’d appreciate your thoughts. Have a great weekend.