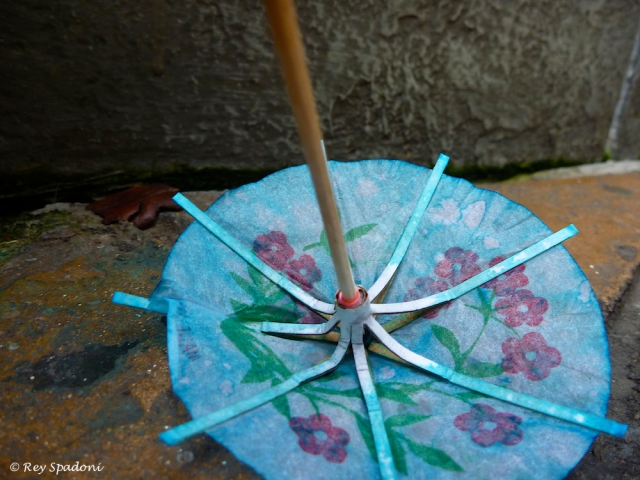 It’s the ‘happiest place on Earth’ and my own prior experience there would essentially agree.  But this time, Main Street U.S.A was filled with disappointed children and frustrated parents.  The rains fell and they fell hard.

The task called for my Panasonic TS1 waterproof camera and I was in full search for images from Disney World that no one has seen a million times before.

As I stood beneath my own umbrella, waiting and hoping for the shower to pass, this caught my attention.

As a side note, the TS1 sleeps with the fishes.  A bit later in the trip, I noticed moisture under the lens shield, a no no for a supposedly water sealed camera.  When I opened the battery compartment, it was soaked inside.  A bit later, I received an error message on the LCD that the battery was no longer usable.  A short, no doubt.  Can’t complain, as that camera has been snorkeling and on numerous wet adventures.  Time to get another…

This entry was posted in Daily Photo and tagged disney world, umbrella. Bookmark the permalink.

2 Responses to The Happiest Place?