I’m continuing to take a break from the Western-themed photos I’ve been posting of late.  This was shot earlier this summer with an Olympus EPL2 and Panasonic 100-300 micro-4/3 lens.  Here’s the before shot: 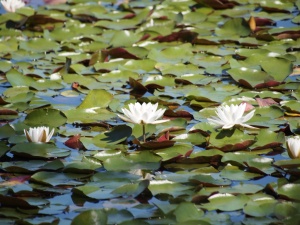 There’s not much that’s special about this grab, but I was struck by the symmetry and linearity of the line of flowers on the pads and the fact that I had a pretty shallow depth of field (f 7.1 on a 300mm focal length).  I decided to run the file through an Apple Aperture add-in called, of course, Tilt-Shift.  The program, replicating the expensive tilt-shift lens effect, blurs the foreground and background, emphasizing the line of flowers in focus.  Some contrast and saturation tweaking were also automatically added by the program.

Is it enough to make it a “keeper”?  Your call.

This entry was posted in Daily Photo, Images and tagged lily pad, tilt-shift. Bookmark the permalink.