Long-time friend and Featured Photog, Prentis Drew, recently contacted 2 Guys Photo to share his photos and research on a number of vintage film cameras that he owns.    Prentis writes:

A rainy day indoor photography project of mine resulted in some unexpected results.  Located in various bookshelves around our house are old film cameras, used mostly as bookends.  One is from our early film days but the rest were handed down from family going back several generations.  One is over 100 years old.  They are beautiful to look at so I undertook to photograph them with my Nikon D90 and some modified flash lighting.  With some prodding by Ed at 2 Guys Photo I began to look into the background of each camera.  In doing so they began to reveal a history of innovation in design, much of which is incorporated in present day cameras.  It has been a fascinating journey.  Working from old to new the first is a Century model 16. 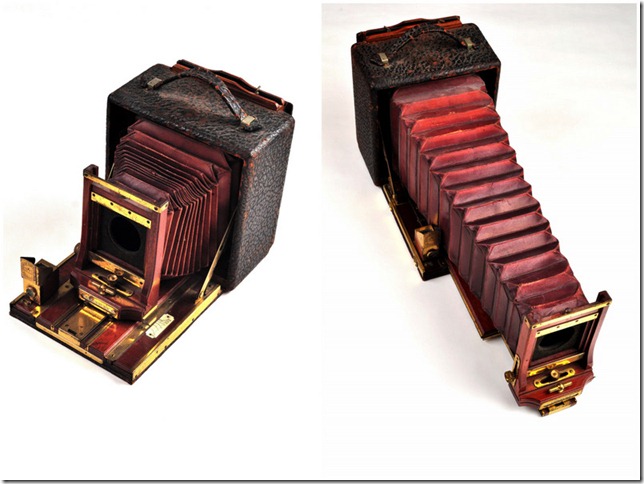 This CENTURY CAMERA, Model No. 16 was manufactured by the Century Camera Company from approximately 1900 to 1902. It was constructed of solid mahogany with dovetail workmanship and covered in cowhide leather. It featured a double extension mahogany bed, attached with piano hinge for stability. The brass hardware is highly polished and lacquered. Focusing was adjusted by a duel rack and pinion adjustment, with a long extension bellows. The camera was fitted with a Century Rapid Convertible lens and a Century Automatic, No. 1 shutter which operates instantaneous, time and bulb exposures.  Unfortunately the lens system has been lost to antiquity. This 4 X 5 model was originally priced at $29.  It is difficult for me to imagine what lens would be used for this camera in its full extension.

The next camera is the AUTO GRAFLEX JUNIOR Camera. 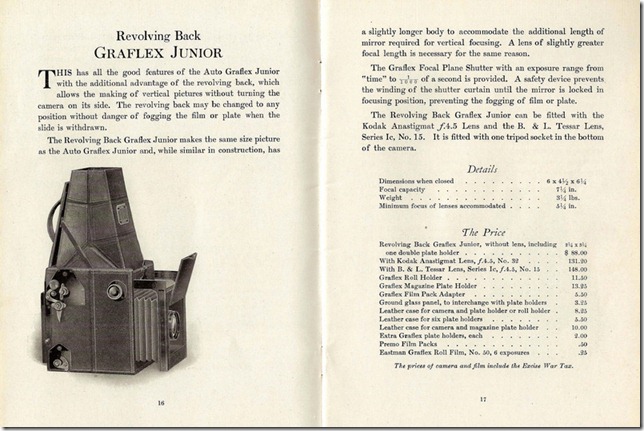 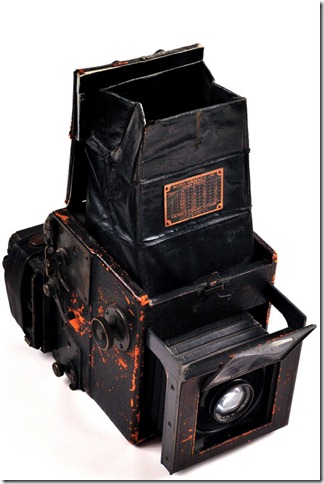 It was manufactured from approximately 1914 to 1924. It was designed as a small, compact reflecting camera for portability. It was fitted with a Tessar f4.5 lens and the Graflex focal plane shutter with five fixed speeds, permitting exposure speeds from time to 1/1000 of a second. This camera takes images 2 1/4 x 3 1/2 inches in size.  I was also able to preserve a 1921 Graflex catalog and have included shot of the page covering this camera.  Note the prices, particularly the lens price.  That was a load of money in those days.  This camera was the precursor of the Speed Graflex press camera.  It also has something that we are very familiar with today, the flip up mirror used in single lens reflex cameras.  Looking down the viewfinder you see your subject right side up but reversed.

Next up is the No. 1A AUTOGRAPHIC KODAK Camera. 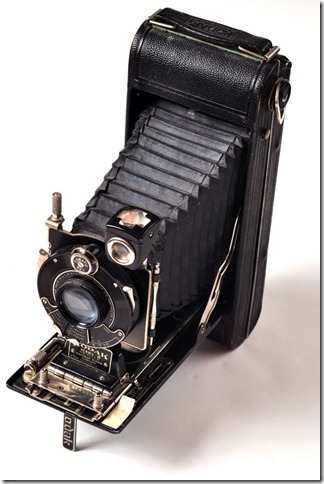 It was manufactured from 1917 to 1924.  This was a mass produced camera which originally sold for $21.00.  It was a very easy to use camera with suggested f stops and shutter speeds for “Dull, Gray, Clear, and Brilliant” available on a handy little slide rule just under the lens.  By virtue of that built in guide this was probably the first point and shoot. If someone can explain the use of the removable little metal stylus shown here just below the viewfinder I would be most grateful.

The next camera in my estimation is the most elegant of the bunch.  It is the German ZEISS SUPER IKONTA C, 6×9 Folder.  This was the top of the line for 6x9cm film cameras…the best of the best for that period. That period in time was the mid-1930s. It was a period of great change in the photographic industry. The roll film had arrived, pushing aside plate film, which continued to enjoy some popularity. 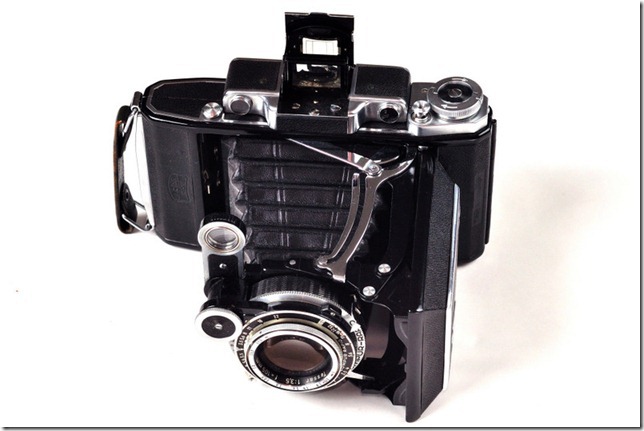 Unusual by modern standards, the prime feature of the Zeiss Ikontas (in all versions and film sizes) is their ability to fold up flat into a very small package — making Ikontas the highpoint of small camera, large negative.  No modern camera boasts such a large negative for its size.    Of course the bane of all folders existence was lack of rigidity and keeping the lens parallel with the film.   Zeiss skilled engineers turned these problems into Ikonta strong points, elevating Ikontas to be generally considered the best folders ever made. 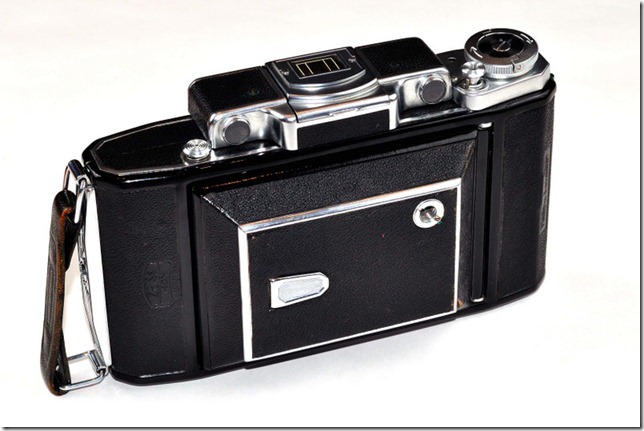 Zeiss Super Ikonta C’s have a large 6x9cm format — larger than today’s Pentax 6×7 or Mamiya RZ!    Made from the early 1930’s to the middle 50’s, they came with a bewildering combination of different shutters and lenses.  Its best lenses were the 105/3.5 Tessar.  The best Tessar was the post war coated version.  The best shutter is the post war synced Compur.  My model has both.

Notice that Magnifying looking thing attached to the top of the shutter.  That is part of the split image rangefinder focusing system which is coupled with the lens.  So this is an early range finder camera, precursor to the Leica system in use today.  It folds down to close the camera.  Forget to bring it back up, and you will have no rangefinder image.   It has separate rangefinder and viewfinder windows. 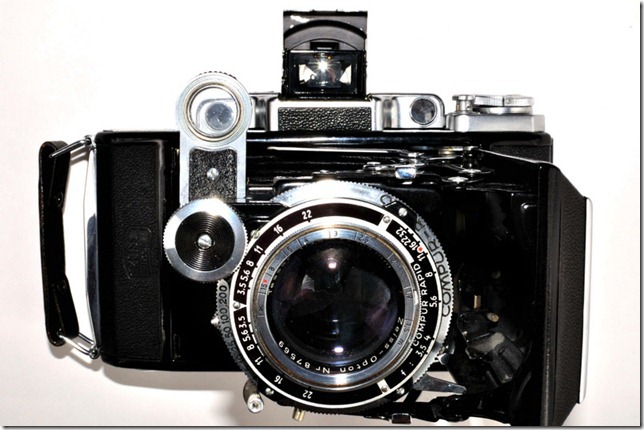 Depending upon the lens/shutter combination, typical shutter speeds ranged from 1 second to 1/250th or 1/400th.  The very compact camera weighs in at only about two pounds with film….or less than your super duper 35 SLR with zoom lens. 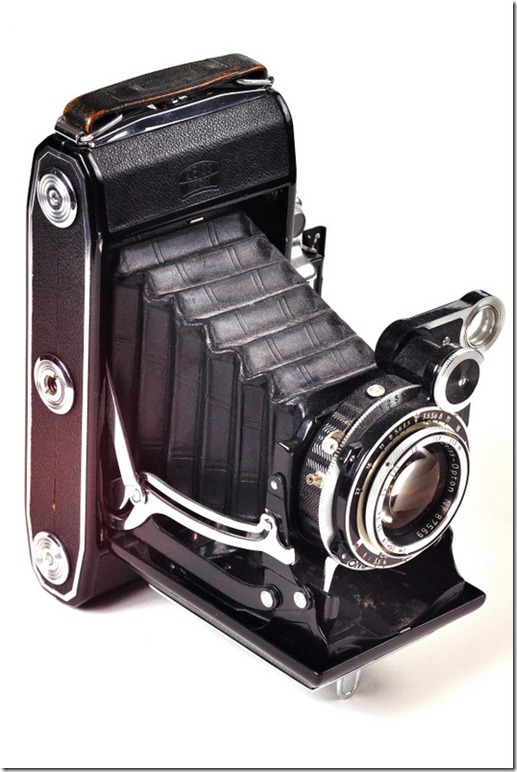 The left top mounted shutter release was something of a luxury feature, since the photographer did not have to futz around with a shutter mounted release.   What looks like a shutter release on the camera’s right side is the button to open the folding front door.  Bellows?  Did I say bellows?  Yep. That’s how the Ikontas folded down.

Enter the 35mm cartridge film camera.  This German made KODAK RETINA l (Type 013) example is a marvel in compactness. 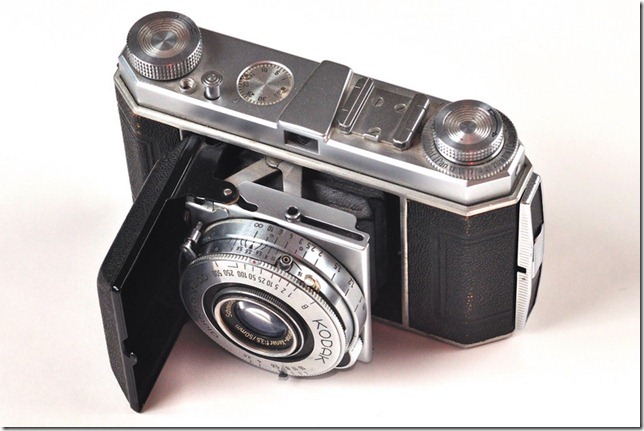 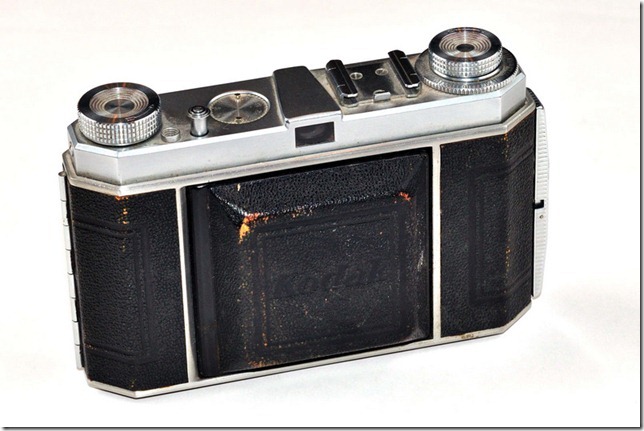 When closed the 50mm f3.5 lens collapses into the body with the use of bellows (again) so the camera could easily be carried in the pocket or purse.  This camera was built between 1949 and 1951.  The shutter speed was adjustable from B, 1sec. to 1/500.  Later models incorporated rangefinder focusing system.

That brings us almost to the present day with the MINOLTA X700. 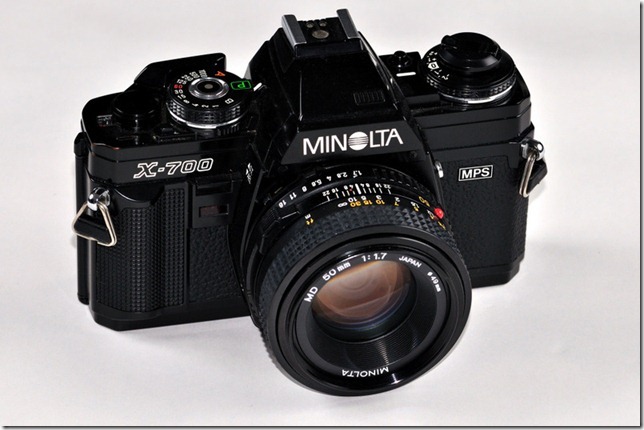 Yes, it is a film camera, and yes, it is now being used as a bookend in our house.  But picking it up and handling it again there are some attributes of this camera that may or may not have been improved upon by our present day digital SLR cameras.  For one thing I am stuck by how compact it is compared to a DSLR.  It isn’t significantly larger than the new crop of mirrorless cameras and still it is a true SLR.  Looking through the lens of this camera and manually focusing on the subject using the split image in the viewfinder is a joy compared to wondering what the many modes of auto focusing in my digital camera are really doing.  Exposure is accomplished by matching a light meter needle to a setting in what amounts to spot metering.  Again there is something comforting about having manual control over exposure instead of wondering what the digital camera is deciding to expose.  Finally the lens has real hyperfocal markings on it…something missing on most DSLR lenses.

I’m not saying that I would ever revert to film cameras.  However I am wondering if we haven’t given up some of the joy of photography with all of the software driven automation contained in our modern digital cameras.  That is probably the allure of the Leica system, albeit at a very high price and not with through the lens focusing.  The X700 is a very light compact, interchangeable lens, single lens reflex camera.  It would be very attractive to me to have this camera just as it is but with a digital sensor instead of film.  Maybe some day.

Well I hope you have enjoyed this trip down camera memory lane.  We’ve come a long way on the shoulders of some very innovative cameras of the past.

Thanks Prentis for this trip into the past.  I agree with you – I think we have given up “some of the joy”, with the advancement of technology.  I also miss the beauty of these cameras: leather, brass, mahogany – all indicating a care and hand craftsmanship which automation has replaced.  It’s wonderful that you’ve kept and still appreciate these fine ladies from an earlier era.  And thank you for sharing them with all of us.  If you expand your collection, be sure to let us know!