Daily Photo Phix: A View of the Zoo, Part 1

2 Guys, two cameras and a one sunny, end of summer morning stroll through a lovely, local zoo.  Ed (see his post tomorrow) and I ventured out to try to each grab a set of images worthy of posting here.

For the task, I grabbed the lowly and quite antiquated Konica Minolta Maxxum 5D, my very first digital SLR camera and one that my own daughter has put to good use all these years later.  Introduced in 2006, the 5D and its big brother the 7D were Konica Minolta’s last ditch attempts to remain in the digital camera business.  Though both bodies were capable and feature leaders in their day, they were crushed under the growing weight of Canon and Nikon, who had moved with relative ease into the digital era, making good use of their extensive photographic systems.  Minolta and then, Konica Minolta, experienced no such ease.  The happy news for Minolta A-mount shooters is that the legacy lives on in Sony (see my posts here and here).

The KM 5D possesses all of 6 megapixels and a you’re not going to want to shoot much above ISO 800 (though I did – – see below), if even that high.

The above shot was taken at ISO 125, f5.6 and 1/500 second.  I used a very low end Sigma 70-300 zoom, but the sharpness and contrast is quite reasonable (though I ran the shot through Topaz Labs’ B&W Effects to provide the sepia treatment and to nudge up contrast further).  I also darkened the background and cropped to emphasize the lion’s face.

The above shot was a huge challenge as it was taken inside a dark, indoors bird house exhibit.  f5.6 (as fast as the telezoom would take me), 1/160 (as slow as I was willing to go to freeze this jittery bird’s motions) and ISO 3200 (way, way too high for this camera – notice the digital noise).  Also, the focus hunted and caught the bird’s back rather than face.  It was too dark to manually focus with much confidence.  Ouch.

I cleaned up the noise as much as possible in software.  I also boosted contrast and sharpening and drew out the red a tiny bit (via a saturation brush tool).  All done in Apple Aperture. 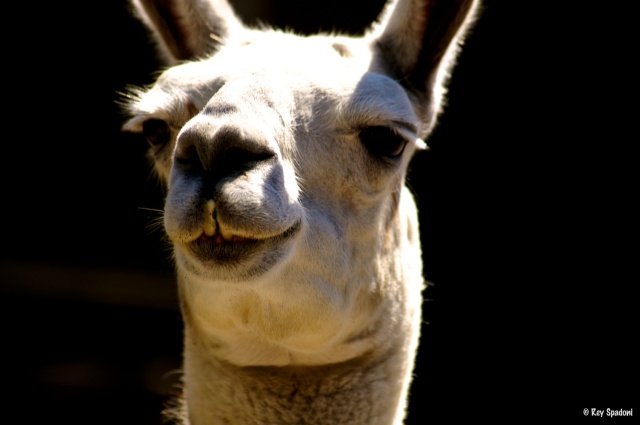 This camel was set against a much brighter sky than this, so I played with contrast and did some selective darkening to emphasize the face.  Those adjustments darkened the face a tad, so I had to brighten him up.  f5.6, 1/400 second and a much more reasonable ISO of 125.

This sloth had the right idea.  He was awake, but barely, and I was glad to catch this quick glance my way as his eyes had been shut the entire time I was there in front of him.  ISO 125, f5.6 and 1/400 second.  I sharpened him up, jacked up the contrast and decreased the resulting noise.

All in all, not bad for a six year old (six decades in digital years) camera.  Fortunately, today’s software tools helped to make amends.

3 Responses to Daily Photo Phix: A View of the Zoo, Part 1