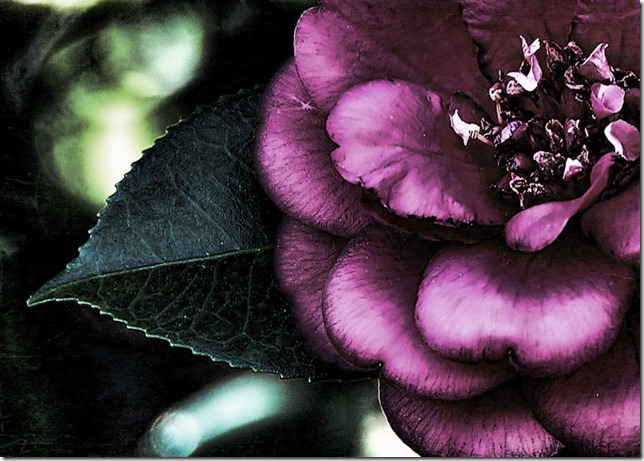 Recently, I was visiting and enjoying the galleries of Kara Stewart, a long time friend of 2 Guys Photo, when I was stopped in my tracks by this stunning image, she entitled “Night Camelia”.  The textures, richness of colors and the crop made for a beautiful image, and I asked Kara if she would share it with all of you.  Here’s what she had to say about the shot:

Kara Stewart: Night Camellia was kind of a fortuitous ‘stumble-upon’ in experimentation.  In March, I took a trip to North Carolina State University’s Raulston Arboretum early in the morning specifically to take some photographs. It was early spring, so there were a good number of plants blossoming but as not as many as there would be in a week or two – I figured this would thin the crowds.

I was attracted to the trees and shrubs with deep green, glossy leaves contrasting with their blossoms – like magnolias and camellias.

In my original shot you can see that it is definitely not a keeper as is, SOOC (straight out of camera). The light is too bright, the color is blown out in the blossom and there is no central focus point (well, it could be the blossom, but it’s kind of back there with everything else).  But as I looked closer at it, I was drawn to the one leaf to the left of the blossom. It just seemed so perfectly shaped and delicate and its shape played well against the blossom.

I decided to see what it would look like if that one leaf were made half (roughly) of the focal point and the rest of the focal point would be enough of the blossom to get the idea of a blossom (it’s not necessary to see the entire blossom in this case).  So I cropped it down and loved the composition, but the exposure and detail was still way off.

I was greatly disappointed, and that’s when I decided to use the image for software experimentation – just to learn and play. I use both Corel’s Paint Shop Pro Photo X2 and Photoshop CS5. I think there are elements and tools of both that are better than the other and so find using both very helpful. I played around with both and didn’t hit upon anything really visually appealing to me until I experimented with Topaz Adjust filters in CS5.

When I applied and tweaked the ‘Night’ filter, the color deepened, the detail became apparent, and the image took on almost a mysterious look. Bingo!  I loved it with the increased detail and Night filter and got that “That’s it!” feeling when I looked at it. For me, that’s how I know an image is ‘ready’.

Here is another example of an image using Topaz Adjust’s Night filter, but this time with a smoother look and detail reduced.  (Ed’s note – this one was an Editor’s Pick on betterphoto.com)

It’s been a popular item on my site on a variety of products so maybe other people also find it visually appealing!

Well done Kara.  As amazing as that transformation was, it never would have occurred if you had not seen the possibilities in the original image and pursued your vision through several iterations.  That’s a good example we can all follow.  Thanks Kara!