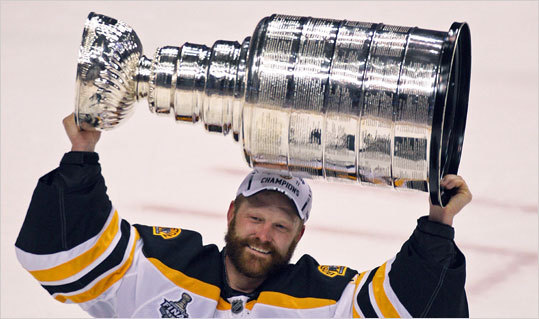 We’ve been spoiled here in Boston.  An abundance of championships, with each of the four major franchises bringing home a national title during the past six years (that’s never been done before), coming our way.

Sure, it was a remarkable team victory, with three gritty come from behind seven game sets and a whole host of made-for-Lifetime-Channel personal interest stories thrown in for good measure (for example, the emotional return of violently sidelined winger, Nathan Horton), but it was this guy who made the difference.  Tim Thomas… making one of the most remarkable playoff runs in history… singlehandedly capturing more than a few of the required 16 victories en route to the moment depicted in this photo above (from the Boston Globe and taken by staff member, Jim Davis).

I hope to be at the “rolling rally” parade this weekend and will, I’m sure, have a few photos to post.