We received this letter from a reader and subscriber to 2 Guys Photo, asking about night photography.  We thought we’d share his question and our response.

I was experimenting last night with night time photography and came up with a few pictures.  Nothing too spectacular, but some are OK.  I am just starting to venture out into night photography. ANY and ALL comments ARE APPRECIATED!!!

Cheers, Lost in the Dark 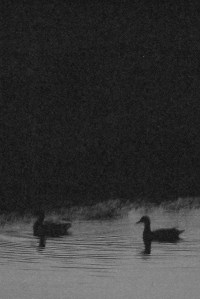 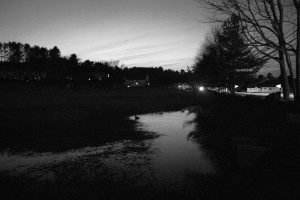 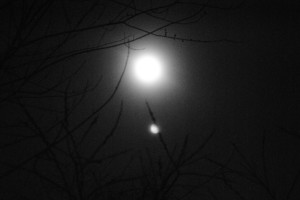 Thanks for taking the time to send in your question and photos.  We’re glad to help out.

Night photography can be quite a challenge, simply because you are asking your camera to do something that it can be, shall we say, “uncomfortable” doing.  Since photography starts with controlling the quality and quantity of light that enters your camera, by reducing that light to little or nothing, we’re oftentimes stretching our camera’s capabilities to it’s limits.  But there are several things you can do to help out.

A faster lens:  You want to use the fastest lens you have.  By fast, I mean a lens that shoots at a wide aperture (low f/number) to allow as much light in as possible.  An example of a fast lens would be one that shoots at f/1.4 or f/1.8, for instance.  Because these lenses allow very wide open apertures, they let in more light than, say, a lens at f/4 or f/5.6, and with more light coming into the camera, you can shoot at a faster shutter speed, hence the label, “a fast lens”.

Similarly, a zoom lens that covers a range of apertures would best perform at night at it’s wider zoom, to take advantage of the larger aperture.  For example, your Nikon 18-55 zoom lens has an aperture range of f/3.5 (wide end)  to f/5.6 (zoomed out).  So your lens will let in more light at it’s wide end, 18mm, than at it’s zoomed end, 55mm, where it’s only f/5.6.  The wide angle shot you sent us, (the second one posted above), was taken at the fastest aperture your lens allows, f/3.5 and it’s also the sharpest.

Now that’s not to say anything slower than an f/1.8 won’t allow good night photography – there are many examples of good night shots taken at higher aperture numbers.  You just need to help your camera along.

Even with your lens at it’s “fastest” aperture, you’ll probably be shooting at a shutter speed that’s too slow to handhold and still get sharp results.  In one of your captions you mentioned getting a tripod – and you’re right.  Even an inexpensive tripod will hold you camera more steadily at a slow shutter speed than you can holding it by hand.  For most night photography, it’s a must.  And a tripod is always good to have.  I keep mine, plus a monopod, in the trunk of my car at all times, just in case.

In looking at your photos, I see several were shot at very slow shutter speeds and were handheld, resulting in some of the blur we are seeing.

If you don’t have a tripod with you, look for other ways to stabilize your camera: place it on the roof or hood of a car, brace it against a wall or even a tree trunk.  And whether you are using a tripod or another stationary surface, use your timer to release the shutter.  In any low light/slow shutter situation, merely pressing the shutter can shake the camera and cause blur.  Your D3000 has 2 and 5 second timer settings, so choose one of those, brace and frame and focus your camera, release the shutter and hold it steadily for the 2 or 5 seconds until the shutter releases.  And since your lens is equipped with vibration reduction, (VR), turn that off whenever you’re bracing the camera or using a tripod.  Just remember to turn it back on when you’re on the move again, (I often forget!).

Increase your  ISO:  The sensor in your D3000 processes the light that comes through the lens.  The sensitivity of the sensor (say that three times fast) can be increased by adjusting the ISO to a higher number.  When the sensitivity increases, the sensor can capture an image with less light.  A more sensitive sensor allows you to shoot at a faster shutter speed.  “Excellent” you say!  Yes, but that increased sensitivity comes at a cost – more graininess/noise at the higher ISO settings.    Experiment with your camera in low light situations to see at what ISO the noise becomes unacceptable.  Then when you shoot at night, set the ISO to the acceptable level.

Motion in the frame:The slower shutter speed that a night shot requires means that any motion in the frame will appear as a blur in the image.  That can give you a desirable effect such as moving traffic.  If you don’t want that, try to wait until there is no movement (the pedestrians or vehicles have passed by, for example).  But the blurred motion effect can add a sense of place to the scene, so I recommend you experiment.

Len flare:  Lens flare occurs when light enters the lens and bounces back and forth between the filter and the front lens element, or between the lens elements themselves.  You know this happens when your photo has those very bright spots appearing randomly, and are not uncommon when there is a bright light either in the frame or just outside the frame, as in a street light or even the moon.  To avoid lens flare, be sure to use a lens hood and remove the filter from your lens.  I’ve also held up a hat to block the light of an unwanted source from falling on the lens.  Just remember to keep the hat out of the photo.

Shoot the moon:  You took some pictures of the moon at night, which can be very difficult.  Here is a post we published recently about capturing the moon, that you might find helpful.  And here is another with some of our readers’ results.

So, Lost in the Dark, I hope you’ve found this information helpful and will give some of these recommendations a try.  We’d love to see and share with our readers your future night photography and hear from you on your experience.  Thanks for writing in and for following 2 Guys Photo.