For a long while, Panasonic and Canon have ruled the advanced compact point and shoot camera roost. Panasonic, through their capable LX series, and Canon, in both the venerable G series and upstart S series, have been the go to options for shooters wanting more quality and less bulk. These cameras are smaller in sensor size than DSLRs and even micro-4/3 cameras, but possess sensors that are bigger than your typical point and shooter. They also tend toward a slightly lower pixel count, thus minimizing digital noise when the lights go down.

More recently, Nikon, through their P7000 aimed squarely and unabashedly at Canon’s G12, and Olympus, through its new XZ-1, aimed directly at Canon’s S95 and Panasonic’s LX5, have entered the fray. Reviews for the P7000 have been lukewarm and for the Oly, quite good.

I decided to take an XZ-1 for a spin during a four day business trip to Washington, DC. Here’s my report.

First of all, every photo in this report was taken on the Oly, transferred over to my iPad via the Apple Camera Connection Kit and then uploaded to this post. That means the shots are right from the camera… no post-processing, no saturation or sharpness tweaks, no cropping, no straightening. All those adjustments are possible via cheapo iPad apps, but frankly it’s a pain to heavily post-process on an iPad, so I’m letting these fly as is. Some would argue that that’s a better test of the camera’s capabilities anyways.

Please note that if some of these photos ‘seem’ processed, that’s because I used the on-board art filters of which there are six. I was most impressed with the Pin Hole, Grainy Film (B&W), and Dramatic Tone filters and found them to be, as I have on Olympus’ PEN cameras, to be worthwhile and not overly gimmicky.

The first thing you notice when you look at the Olympus XZ-1 is the plump, Zuiko branded lens on front. It’s big and fast at an aperture of 1.8, a fact that Olympus doesn’t want anyone missing given the big F1.8 badge on front. This is a front row feature that distinguishes this camera from its competitors with slower glass, particularly the Canons and Nikon which close down big time as you zoom out. The second stand out feature is the turn ring that surrounds the barrel of the lens a la the Canon S95, but unlike the S95 the function is not customizable. I didn’t miss that as the specific role of the ring made sense in each mode, for example, in aperture priority mode, it changes aperture… in shutter priority mode, it changes shutter speed. Logical.

The above shot was taken indoors… in the same room where the Watergate Hearings were held. The subject is Senator John Thune (South Dakota).

Much has been made in internet forums about the slippery grip and lack of reasonable surface to adequately hold the camera. I didn’t have a problem with that as the raised Olympus lettering in front and rubberized thumb grip in back provided more than adequate purchase for my medium sized fingers.

I found the overall interface to be fine, with one glaring caveat (noted below), and the Olympus menu system is pretty intuitive — much, much more so than Olympus’ PEN series cameras. There is an ability to save a bank of settings to a custom mode… vital to my way of shooting as I always prefer to have easy access to three-shot bracket burst shooting for HDR purposes. The Oly only gives you plus/minus 1.7 but that’s close enough for 2.0 EV bracketing purists.

I found the colors and sharpness at default settings to be quite good, but my subjective assessment of the camera’s lowlight shooting capabilities place it second to the Canons. This, despite the faster and brighter lens. 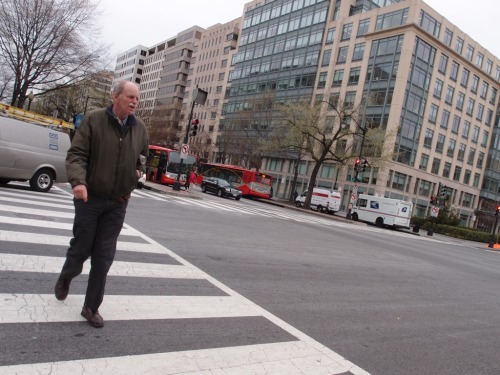 The autofocus was pretty quick and responsive though again rather subjectively, I feel as though the Canons and the Panasonic in this class are a good bit zippier in this regard. As a walk around shooter, though, I didn’t feel constrained by the XZ-1. 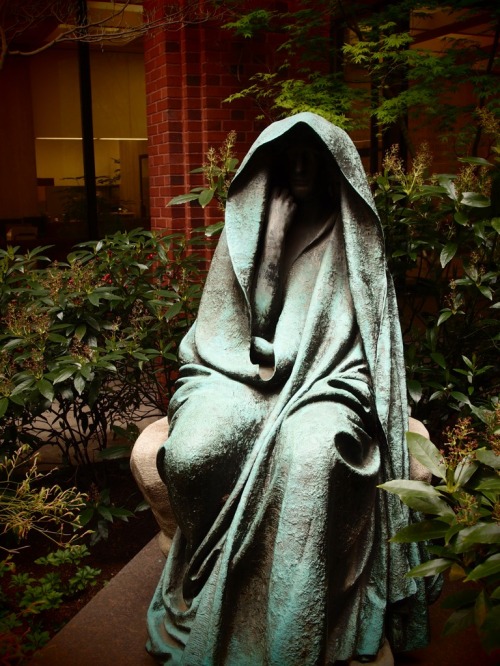 As the above photo was taken in Washington, DC, I have to assume that the statue memorializes someone of some historical significance. Looks like the Grim Reaper to me, though.

But, all was not bliss. I had two pretty substantive problems with the Olympus, both of which I consider to be show stoppers. First, I took my fully charged XZ-1 out as the sun was setting on the cherry blossoms near the Washington Monument. I took exactly 91 photos, after which time the battery died. Completely. My experience after that was fairly comparable, yielding maybe 120 shots each charge after. The battery is quite small physically and so I assume that it’s not built to pack much punch. And since you charge this battery in camera, having a spare and charging that too for an outing of shooting is less convenient.

The second problem had to do with the zoom rocker mechanism. I frequently found that a small jog of the switch toward the telephoto end prompted a full continuation, sometimes all the way to the end of the range, resulting in an extreme close-up when I thought I was merely zooming in a little. Then it took a few seconds after the zooming for the camera to return control to the shutter, resulting in a slight but highly annoying delay in being able to click the shutter. So much for the decisive moment.

I searched the electronic only instruction manual to see if this was actually a feature of some sort, but my rather cursory review revealed no such finding. Perhaps I just missed it but if it takes that much effort to figure out something like this then it really better not be a feature or that would be quite damning of Olympus’ technical writing team.

So, after all is said and done… I really liked this camera, or perhaps I should say, I really wanted to like this camera. The feeble battery life and herky-jerky zoom had me reaching for my iPhone 4 camera instead. To bad as Olympus was so, so close…

UPDATE – April 8, 2011:  It turns out that I did, indeed, have a faulty camera.  Olympus confirmed that with me and so I had a choice: either deal with Olympus technical service via mail or go back to the store from whence it came.  I chose the latter, but unfortunately, they were all out.  So, I’ve been waiting.  And waiting.  And waiting.  Let’s assume that the battery life is substantially better and that the weird mind-of-its-own zooming thing are fixed, then I’d have to say that the Olympus would be a recommended camera.  Is it better than a Panasonic LX or Canon S series?  That’s a tough one.  Each brings its own merits to the table.  If you’re pressing me to pick one, only one… I’d have to say the Pany.  Wider, faster lens.  GREAT dynamic B&W mode.  Good interface.  Proven technology.  If and when I get an XZ to actually use, I’ll post an update here.

The Olympus XZ-1 can be found here.

This entry was posted in Gear & accessories, Images, Travel. Bookmark the permalink.