When new “standards” emerge with a goal of toppling existing ones, it’s usually a long and difficult climb for the upstart.  Just ask Sony (Betamax in the mid ’70s, Digital Audio Tape in the mid ’80s, the Minidisc in the mid ’90s, the MemoryStick in the mid ’00s… when will they learn?) how hard it is to push a new standard into the market, particularly when the advantages aren’t all that compelling.  In the photo industry, several film and camera manufacturers have touted the benefits of little.  Little film size, little cameras, and even little money required.  We popped 110 film cartridges into our automatic cameras and then APS canisters into picture makers, all with the hope of improved convenience and less bulk.  Generally speaking, these new standards failed.  Miserably.  Smaller was not better.

In the digital era, the “smaller format” APS-C sized sensors have ruled the day when it comes to DSLRs, while much, much smaller sensors have found their way into a burgeoning point and shoot camera market.  Some have claimed that APS-C sensors are merely a transitional size, waiting for full size (i.e., equivalent to traditional 35mm film) sensors to come of age.  Others claim that the APS-C advantages, namely the ability to create smaller and lighter cameras as well as the “crop factor” or multiplication factor that allows, for example, a 300mm telephoto lens to become the 35mm equivalent of a 450mm lens (particularly helpful for wildlife photographers), are enough to keep this format going strong for a long while.  This debate continues.  Meanwhile, full size sensor, or “full-frame”, cameras have dropped in price.  With a larger sensor, the recording surface is bigger and, therefore, image quality and low light sensitivity improves.  The majority of serious photographers have already made the leap to this format.

Then a few years ago, Olympus and Panasonic, introduced the 4/3 standard (named after the 4×3 aspect ratio of the sensor) which was based on an even smaller, yes smaller, sensor.  Hadn’t they ever heard about 110 and APS?  This built-from-the-ground-up digital technology would, they said, allow for smaller and lighter cameras.  Olympus, considered a failing holdover from the film era who hadn’t been able to succeed in the new digital age, and Panasonic of refrigerator and electric razor fame, weren’t ever considered formidable challengers to industry leaders Canon and Nikon.

[CORRECTION: I received this comment from a reader named Walter: A minor point: 4/3 is actually named after the “tube” size in inches (a system of size descriptions left over from TV from the vacuum tube days) – if you go to the earliest literature (Olympus still has the official press releases on their web site,) you’ll find that they call it 4/3 type, and say how superior it is to the 2/3 type in large compacts (which at the time sometimes had 2/3″ sensors.)]

Here’s a graphic (courtesy of Wikipedia) depicting the relative sizes of the various sensors.  4/3 is depicted below in red, while the larger APS-C sensors are in green and yellow.  The tiny squares in the lower left corner are compact camera sensor sizes. 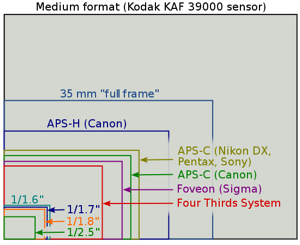 The format staggered when decent but hardly innovative cameras were introduced and met with a lukewarm critical and consumer reception.

And then just when you thought you might add the 4/3 standard onto the same list as Betamax and MemoryStick, the two companies shocked the world.  It didn’t seem so at the time, but that’s precisely how we’ll remember those days.  Panasonic, first with its Lumix G1, and then Olympus, with the introduction of its PEN series (throwbacks to earlier Olympus film cameras), launched the micro-4/3 standard.  These cameras feature the absence of a mirror box, common on DSLRs, and can be likened to point and shoot cameras with bigger sensors (still not as big as APS-C, but closer) and interchangeable lenses.  And, in a stoke of genius, the makers encouraged the use of adapters allowing older, manual focus rangefinder and other system lenses to mount on the bodies, albeit without autofocusing and metering features typically,

The result: truly smaller and lighter cameras.  And a market hit!

Micro-4/3:  The future?  A compromise?  A fad?  Yes.  But also a very real glimpse into the future of digital photography.

I’ve dabbled with micro-4/3 cameras and have loved their smaller size, but also bemoaned their very real faults.

Yet recently, I made the full plunge into micro-4/3.  Full.  No looking back.

Part 2 in this series will include the reasons for the switch and Part 3 will provide some real world photo tests and impressions.

The Olympus EPL2 can be found here.