You can lead a horse to water…

This was the image I posted on January 20 on my website as a daily post, with the caption “You can lead a horse to water…”.  Based on hits and comments, it was pretty well received and can be viewed here.

I thought it would be of interest if I shared some background on how I made the picture.

My wife and I were in Sedona, AZ at Red Rocks State Park.  This beautiful park features paths and meadows, the Oak Creek River, with the main focal point being the famous Cathedral Rock (stay tuned).  We had spent the better part of an afternoon there and were following a path that tracked the wooded banks of the river.  From the opposite bank emerged a group of horses and their riders, heading down to the river’s edge to water their horses.

The sun was setting and cast a beautiful, warm light and long shadows on the scene but given the many trees, I knew we’d be in complete shade in only a few minutes.  So I aimed my Nikon D90, and to capture as much light as I could, I shot at f5.6 and 1/25 second.

When I viewed these shots that night I was dissapointed that they weren’t as sharp as I would have liked and regretted not boosting my ISO.  And although I liked this image of the rider trying to coax her horse into the water, there was another problem – a distraction in the background.  Here’s the original image:

As you can see, there was another rider in the background trying the same means of persuasion on her horse, and with similar results.  So, I fired up Corel PSP photo editing software and cloned the second rider right out of the scene, and then cropped to bring more attention to my main horse and rider, while also eliminating the second horse.  Then a tweak to the contrast and colors and I was done.  In retrospect, I think the softness actually adds to the glow of the setting sun and I’m glad I left the ISO low.

Another shot that day of the same horse and rider, plus a friend also came out pretty well. 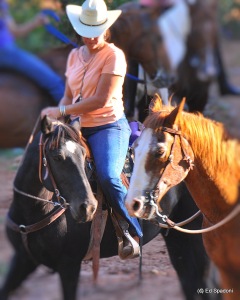 This image had some background distractions too, but I felt the two horses in the foreground would hold the viewer’s attention.  So I used selective depth of field in PSP to blur the background and again, tweaked the contrast and colors a bit.

1 Response to You can lead a horse to water…